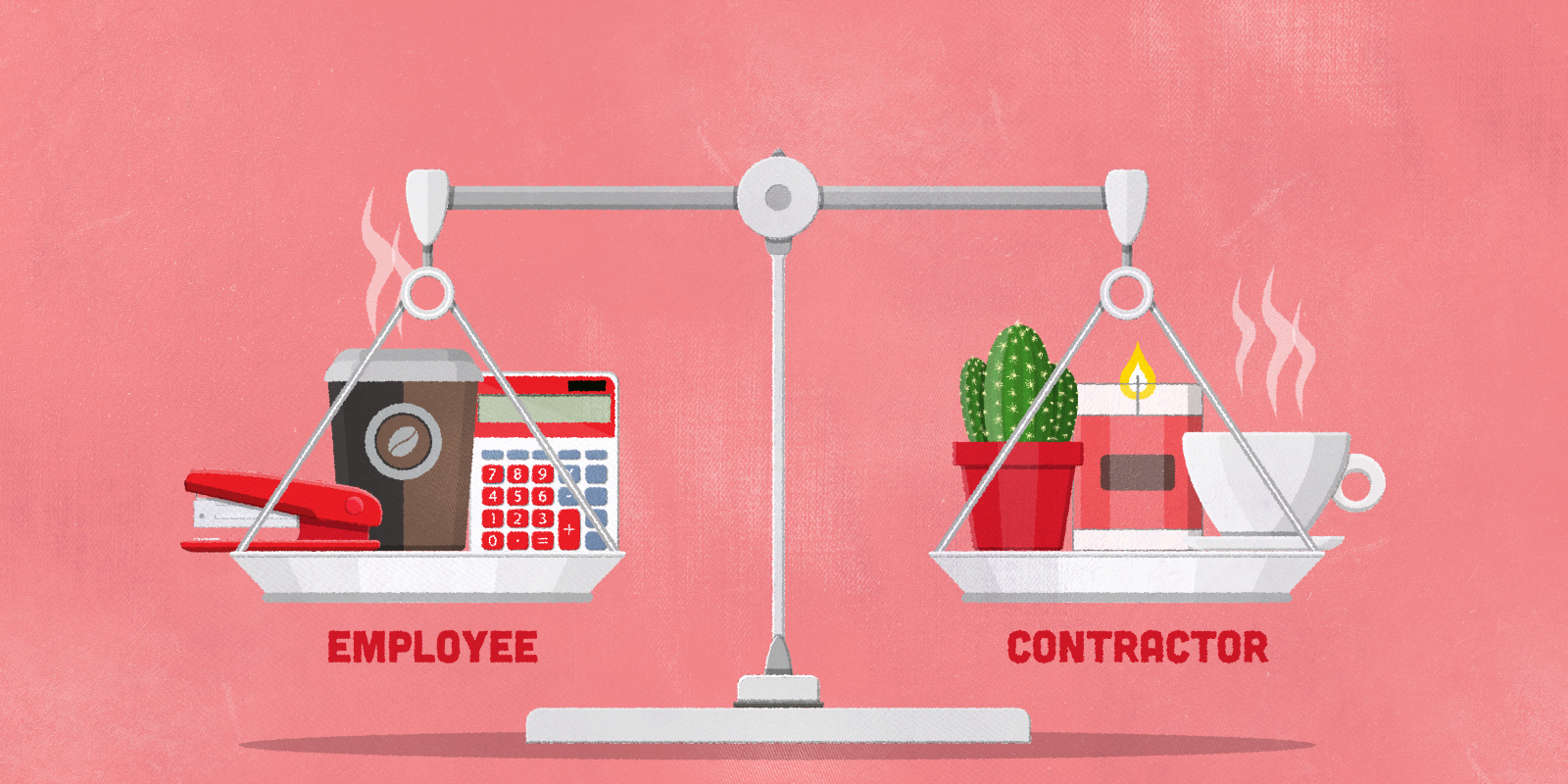 Employee vs Contractor: A Mini Guide for Canadian Small Businesses

Whether you’re hiring your first employee (or contractor) or your fifty-first, you need to know that you’ve defined the working relationship properly. You need to know the factors that constitute someone being classified as an employee or contractor and which of these factors makes the most sense in terms of your business needs and the needs of the person or people you’re hiring.

Before we dive into the difference between an employee and a contractor, we want to provide a quick overview of the changing employment landscape.

Employment trends and the rise in self-employment.

In Canada, self-employment (contract work) has been on the rise and is currently at 2.9 million — representing an increase of nearly 15% over the past four decades.

Although it hasn’t hit the 45% mark as once predicted by Intuit Canada, the shift brings to light one thing every employer should know — the difference between a traditional employee and a contractor. 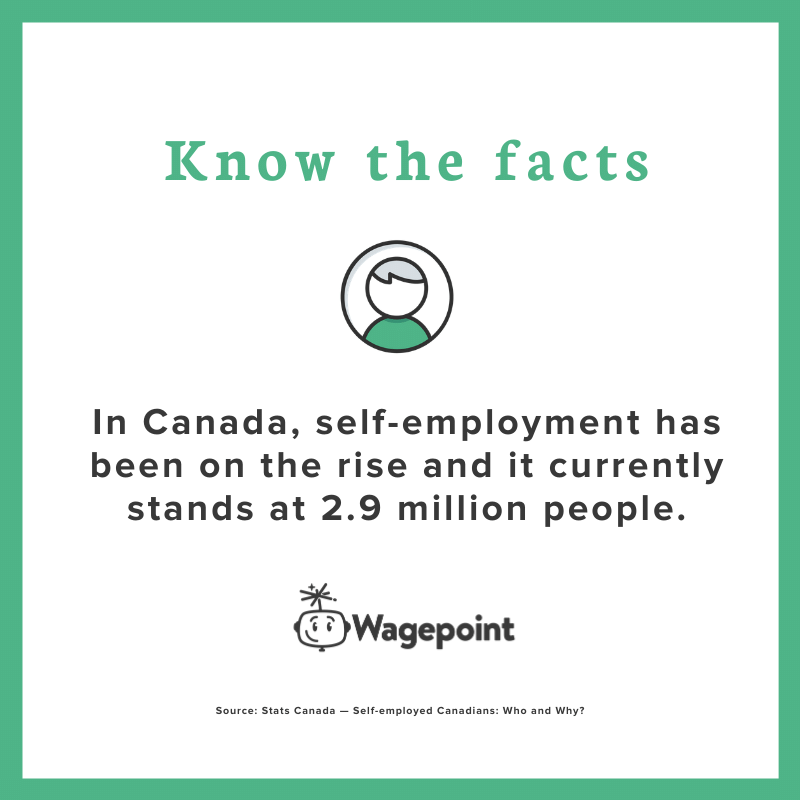 Why do some people prefer to be self-employed?

More workers in professional, scientific and technical services have chosen to be independent contractors. Many of these individuals state that they make this choice because it gives them more freedom and independence in how and when they work.

The nature of the work is another factor in self-employment.

Some industries, like marketing and advertising, work on a contract basis with a majority of their clients. That’s the nature of their industry. There are many businesses that don’t need a full-time marketing team or specialized service, which is why it makes sense to contract for these needs.

Conversely, a small business itself needs to look at the industry in which it operates and the role it’s trying to fill to determine if it needs an employee or a contractor. For example, if you’re running a cafe, it’s likely that you don’t need a freelance barista.

What on earth is the gig economy?

Since companies like Uber and Lyft (also known as gig economy giants) have entered the scene, there’s no question that the Canadian labour market has shifted. Both companies have built their models around self-employed drivers who work at will. However, there have been several legal challenges to this because there are times when the lines between employee and contractor get blurred.

The growing rate of remote work.

Remote work or working from home is another trend that shows no sign of slowing down. According to recent research, more than half of workers work outside the office two or more days a week.

While these workers can either be employees or contractors, the point is that with technology, people can work from almost anywhere.

How the difference between an employee and a contractor affects small businesses.

With contract work now growing at a faster rate than permanent employees, almost every small business is faced with the question: “Do I hire an employee or contractor?”

This has also gone hand-in-hand with newly unemployed, skilled middle-aged workers making a career shift into self-employment and Millennials starting their own businesses as a result of fewer traditional job opportunities. In fact, 40% of Millennials have participated in the gig economy.

Small businesses and startups can certainly reap the benefits of self-employment. Depending on the job role, small businesses can employ contractors more easily than employees, subsequently lowering their burn rate.

The key is classification.

There’s often a strong market backlash against employing contractors when they’re actually employees. The technical term for this is misclassification.

Cases against Uber, Scotiabank and Modern Cleaning Concept are clear indicators that the government won’t put up with small businesses purposely misclassifying self-employed workers and hoping to get away with it.

Determining whether someone’s an employee or contractor.

Don’t be ashamed if you don’t know the answer off the top of your head. It’s a question that trips up even some of the most experienced business owners.

As a starting point, it’s best to consult the Canada Revenue Agency (CRA)’s RC4110 Guide. Generally, the CRA determines a worker’s status by looking at:

Additional factors you should consider when determining a worker’s employment status include: 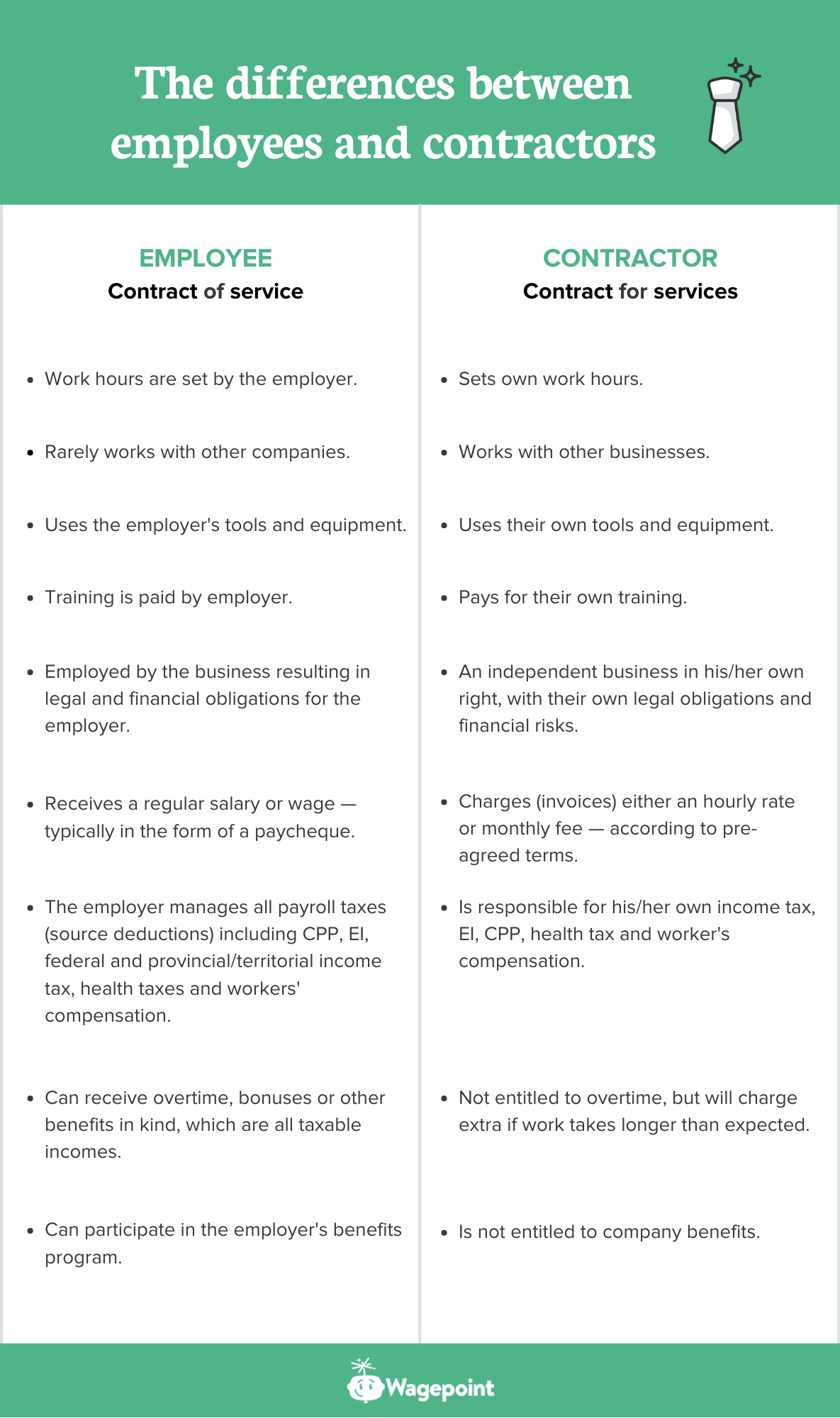 If you’re a business owner in Québec and you and your worker have a disagreement over the worker’s status, then either of you can request for a ruling from Revenu Québec. Regardless of the applicant, the following forms must be filed:

Request a ruling from the CRA.

For small business owners outside of Québec, you can ask the CRA for a ruling. There are a couple of ways to do it:

Note: You must request a ruling before June 30 of the year following your worker’s employment term.  For example, if the employment period took place in 2020, the ruling request has to be made before June 30, 2021.

Employees versus contractors — the “pros” and  “cons”.

In this section, we’ll discuss the pros and cons of each option. However, we’re putting the terms in quotations because every business is different. A pro for one business might be a con for another and vice versa.

The “pros” of hiring employees:

The “cons” of hiring employees:

The “pros” of hiring contractors:

The “cons” of hiring contractors:

The differing tax benefits of employees and contractors.

Where there’s income, there are taxes. Below we outline the different tax benefits to consider when hiring either a contractor or an employee.

There are no direct (government-funded) tax breaks for hiring contractors, except that the employer is absolved from the responsibility of overseeing federal and provincial/territorial employment tax obligations.  That makes hiring contractors a financially viable alternative for many companies, provided the correct employer–contractor relationship is maintained.

Can a contractor become an employee or vice versa?

Yes. And it’s not unusual for this situation to come up. Sometimes people start as contractors but are then hired as employees. Typically, this happens when small businesses want to keep their costs low until the business grows. The flip side is also common. For several reasons, people who started as employees may choose to work as a contractor down the road.

So, how do you go about doing it? You’ll have to formally update the original contract to reflect the new status. That means modifying the agreement from a “contract for services” to “contract of service” or vice versa.

Switching from contractor to employee.

Making the switch will require you to go through the normal procedures of hiring. That means asking them to fill out Form TD1, Personal Tax Credits Return and other traditional employment documents.

As well, you’ll need to understand how the nature of the relationship will change once a worker becomes an employee after being a contractor. Some things to consider are:

Not only is having a good understanding of the difference between an employee and contractor important — using software that can recognize the difference is just as crucial. Paying employees and contractors can be difficult since they’re not one and the same. Working with payroll software  that has these capabilities will help simplify the payroll process — you’ll be able to skip paying the payroll taxes or apply them easily.

The consequences of misclassification.

Canada is strict when it comes to businesses avoiding paying taxes knowingly. Businesses can face potential prosecution, fines of up to $25,000 and a jail term of 12 months. 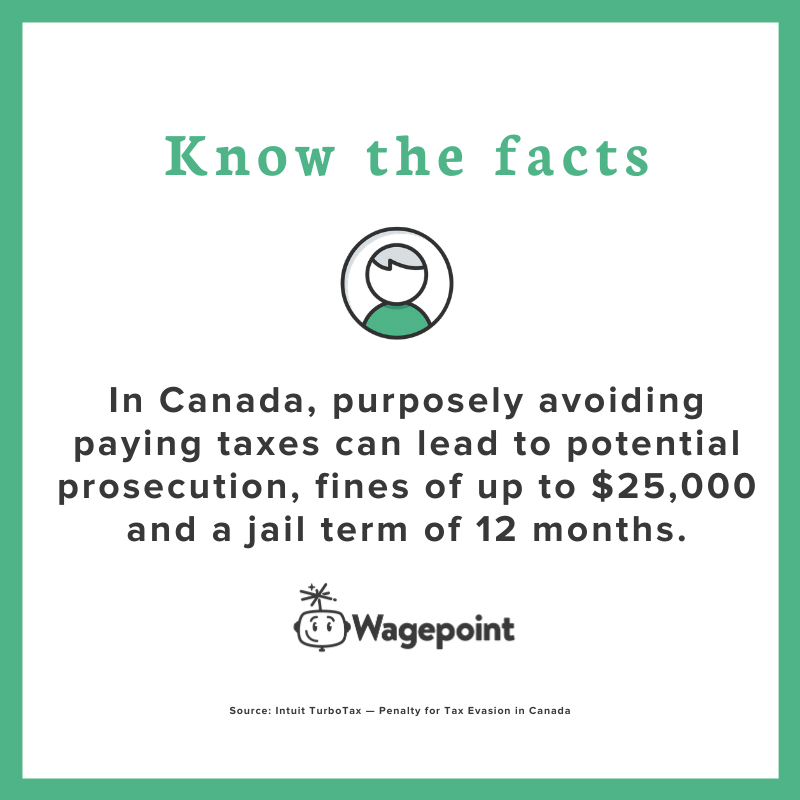 Failing to withhold the necessary source deductions ( CPP, EI, and income tax amounts), if done so “knowingly or under circumstances of gross negligence” will result in a fine of 20% of the amount overdue, plus the balance that must be paid.

Late payments also carry a 10% penalty, which would be the case if an employee was knowingly classified as a contractor when that wasn’t the case.

Another result of purposeful misclassification comes with the forms, such as the TD1, which wouldn’t have been submitted to the CRA, and thereby could result in a further $2,500 fine.

There’s also a risk to those who know of or advised this situation to have happened in the first place:

“Tax legislation contains various measures to encourage compliance, including penalties for a third-party who counsels others to file their returns based on false or misleading information, or who knowingly accept false information provided by their clients for tax purposes.”

Employers are deemed to hold funds in trust for the government, which means failure to pay those funds will result in a court judgment being made, allowing the CRA to:

Garnishment action allows the CRA to intercept funds payable to you by a third party, such as wages or other income sources, or from any other federal government department owing you money.

It goes without saying, employment law, especially when classifying whether someone is an employee or a contractor is a complex legal matter.

When it comes to assessing the nature of the contractual relationship, the CRA advises that: “In a written contract, the parties may state that in the event of a disagreement about the contents of the contract, it is to be interpreted under the Québec law (civil code), even though the contract was formed for example in Ontario (common law). Depending on where the contract is formed, unless it is stated differently in the written contract, use the set of factors appropriate for your situation.”

An employer who has knowingly misclassified a worker has therefore broken multiple laws, which means the repercussions can be costly and penalties harsh to discourage others. Contractors themselves might be liable, as well as any other third-parties who aided those found guilty.

The problem for small business owners isn’t finding talent — it’s finding the right type of talent. Fully understanding the differences between employees and contractors can help you make the best choice. No matter which type of worker you choose, be sure not to misclassify them. The repercussions can be costly.

The advice we share on our blog is intended to be informational. It does not replace the expertise of accredited business professionals.

Mel is a Brand, Content and Communications Lead at Wagepoint with a keen interest in Wellness, People & Culture and the Employee Experience. When she isn't writing, she spends her time dog mom-ing, sipping on lattes and researching into different personality frameworks.

Your 2022 Year-End Survival KIT is Here!

Payroll 101: How to Become an Employer & Set Up Payroll for Small Businesses (Canada)

Payroll 101: A Canadian Small Business Guide to Hiring and Paying Your First Employee

Have No Fear, Here's How to Avoid a PIER This Year!